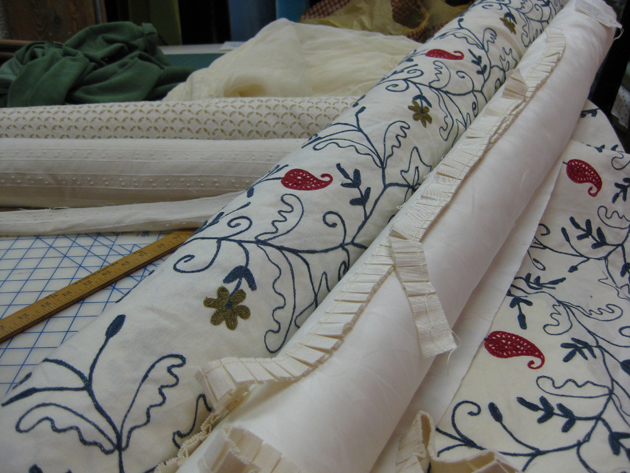 Our consultation was a blast!  We really got to know each other and came up with some fantastic ideas for Leah’s dress.  Although our actual design was still unclear, we decided it would be some sort of vintage look of mixed eras.  A little from the time period of the house (1850’s), a little from the time period of classic couture (1947-57), and a little bit modern day.  We wanted it to have a ‘Timeless Vintage’ quality, if that makes any sense.  We also wanted to have a ‘Garden Party’ type of feel.  She wanted to keep the tradition of a mainly white dress, but wanted to add color wherever possible.
As for dress specifics, we decided the best for her figure would be an A-line floor length skirt with possible train,  a modified sweetheart neckline, a wide belt to accentuate the smallest part of her torso and some sort of cut-in-one sleeve that would show off her beautiful shoulders.

We also loved the idea of having a transitional garment.  This is where you have one look for the ceremony and then you add or subtract something to make the look different for the reception.  Brides may want a garment like this for different reasons.  Leah thought this would be a way to be a little more chaste for her vows and a little more revealing for the party.  I had a transitional garment because my wedding was an outdoor wedding in March, which is a little on the chilly side.  I wore a little jacket for the ceremony and then had a short sleeved dress underneath for the indoor party afterwards.

For Leah, I suggested that we add a jacket for the ceremony that would not be worn for the reception.  The jacket be a little more ceremonial, would be the piece that encompassed the Garden Party feel as well as be the garment with the train.  That way, she could have the drama of the train, but wouldn’t have to worry about it dealing with it later when she wanted to dance.  She loved the idea and took it one step further, suggesting that we use the same wide belt on each look to tie the looks together.

After our long and exciting discussion at my studio, we then took our favorite research pics to my favorite store, Mulberry Silks Fine Fabrics, for further inspiration.  Well, we certainly got it in spades.  They had so many beautiful styles to consider!  I was so happy about Leah’s attitude toward the process.  She was always eager to hear my opinion and open to even the most unexpected of fabric choices.  Even the staff had a great time seeing what we were pulling and putting together!  After going through many combinations, there were some clear winners that we both were in love with.

Now, I do not usually encourage buying fabrics before the pattern is made (or in this case even before the sketch!).  It is difficult to accurately estimate how much yardage will be needed for something that doesn’t exist yet.   But this particular weekend Mulberry Silks was running a 40% off sale.  We could overestimate yardage by 40% and still come out with a bargain!  In contrast, if we didn’t buy the fabrics that we had fallen in love with, they would probably be bought by someone else during this sale.  The savings were just too good to pass up!

We realized that at this point the store was approaching closing, so we decided to sleep on it.  If we were still in love the next day, we’d go ahead and make our first purchase.